I love teaching in the kitchen. Today we are going to do some food science experiments. Your child will be rewarded with an edible goody or seeing food used in an unusual way.

My children like to make things to eat in the kitchen. With a little thought you can also teach them about science.

Food science experiments can teach your child about how temperature can change matter. You can have your child watch water turn into ice or you can make it an edible project by making popsicles

You will need three paper cups and either popsicle sticks or spoons. Fill one cup half full with water. Place orange juice in the second cup. Use pudding in the third cup. Have your child check the cups every half an hour to see which cup froze first.

Baking can also teach your child how temperature can change matter. Your child will learn about how ingredients interact with each other to make edible food.

Here is a list of the main ingredients used in baking and a simple explanation of what it does;

A basic cake combines flour, sugar, eggs, and oil. A balance of the three ingredients is needed to make a cake. Fewer eggs make a denser cake. More flour makes a bread like cake.

Wacky cake does not use eggs for leavening or binding. A chemical reaction causes the cake to rise. It is a most tender cake. My recipe calls for;

The flour is combined with cocoa, salt, sugar, and baking soda. Then three wells are made. In one well add oil. In another vanilla is added. In the last well vinegar is added. Then water is poured over all and the batter is mixed. The mixture is baked at 350 degrees for 30 to 40 minutes. 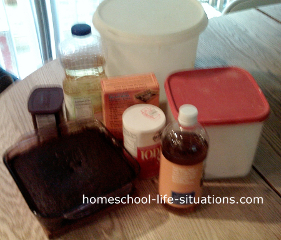 Other Cool Things to Do with Food

There are other food science experiments. You do not need to make something edible.

My son learned about density by combining water, oil, and maple syrup. The mixture settled into three layers with the oil on top, then the water, and last the syrup. He also dropped in a grape and a ice cube. The ice floated on the water. The grape floated on the syrup layer.

You can also test your breakfast cereal to see how much iron is in it. You will need a strong magnet and a cereal fortified with iron. Most experiments recommend Total. I used Grapenuts. I used a food processor to crush the cereal. I then placed some water in the bowl. I then held a bar magnet in the bowl of cereal and water. Some of the cereal stuck to the magnet. I was not sure of what I was looking at so I place a metal spoon, a plastic spoon, and a piece of cardboard in the bowl. The Grapenuts did not stick to the spoons or cardboard. I also crushed the cereal to a fine powder and placed it on a plate. Some of the powder stuck to the magnet. 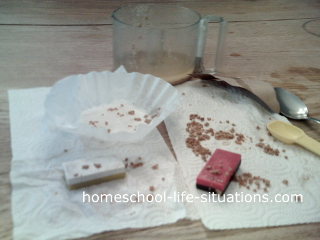 A potato can be used to determine the polarity of a battery. Cut the potato in half. Connect some copper wire to each terminal on the battery. Place the wire about one inch apart on the potato. Make sure that the wires do not touch. Soon one of the wires should turn green. The other wire may bubble. The bubbles indicate the positive terminal and the green indicate the negative terminal. I noticed a green spot on the potato under the wire that was hooked to the negative terminal. The other wire did not bubble.

I have also heard that lemons can produce electricity. I wonder if there are other fruits or vegetables that can do the same.

Food science experiments can teach your child about the world in which he lives.