Graphic organizers are great for showing how to classify organisms in biology. My daughter was having trouble visualizing the different biological classifications. I made a Venn diagram and some flow charts to help her understand the different kingdoms.

Venn diagrams are graphic organizers used to contrast and compare information. I used different colored lines for each circle help my daughter visualize the information. 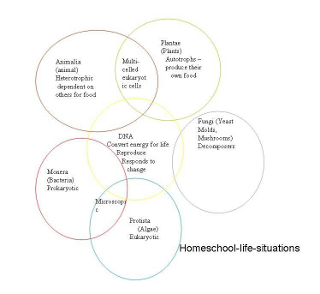 The center circle contained the characteristics of all life. All of the circles overlap with the center because all organisms are alive. I used a yellow line because I thought that yellow was a good representation of life.

I used green for the Plantae kingdom because plants are usually green.

The kingdoms Monera and Protista overlap because they are microscopic.

I used black and black dots for the Fungi kingdom because they are the decomposers. The Fungi group does not overlap with any other group.

Besides each kingdom's Latin name I used the English equivalent word. I also mentioned the main characteristic of each kingdom.

Flow charts are another type of graphic organizers. The charts can help place organisms into categories. You can make a biological key that list all of the five kingdoms. Here is a picture of one that I started. 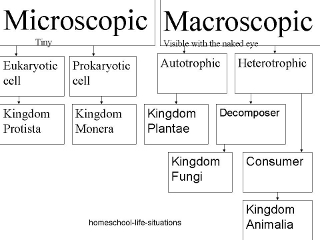 You can also make a more detailed one for each kingdom. I did one for the kingdom fungi. I used the same colored lines that I used in my Venn diagrams. In the kingdom box I list some of the characteristics of that kingdom. The kingdom links to the Phylum. In Fungi there are four phyla. 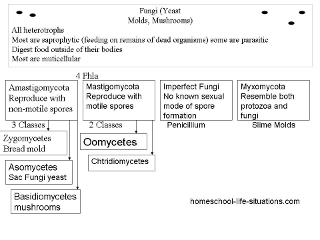 The Phylum is linked to the organism's class. In the phyla Amastigomycota there are three classes. The classes are linked to examples of species that are in each class.

Classification is very detailed in biology. In our textbook the author only talks about kingdom, phylum and class. The author does not go over order, family, and genius. He does not give Latin names for the species.

Another idea would be to use different colors for the phylum, classes, and species. In each kingdom all of the phylum could be one color and all of the classes could be another color.