A Review of Curriculum

We have used several homeschool spelling programs. With most of the programs your child is given a list of ten or so words that they are to learn during the week. Then the child is tested on Friday.

The curriculum below is listed in the order in which our family used it.

When I first started teaching spelling I used the lists that were provided in Teaching Tips by Rebecca Avery. In her chapter about spelling she says to start with the short vowel sounds. Then move onto various long vowel combinations. She also has a list of common words for each grade level in the back of the book. The lists of common words are for grade 2 through 6.

We also used Success in Spelling Level 1 also by Rebecca Avery. It is very similar to the method in Teaching Tips. I bought the book because the lists of words were already in week form. Lesson one is short vowel sounds. Lesson two is silent e. In later lesson your child will work on two vowels together, some consonant blends, and the open syllable rule.

There are nineteen lessons in the first book. For each lesson there are activities to do each day of the week.

There are also nineteen separate pretests for the most common words in grade two. 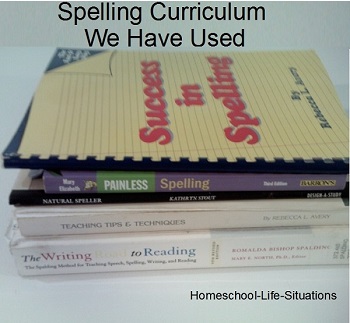 Another homeschool spelling curriculum that we have used is Natural Speller by Kathryn Stout. The book is organized in grade levels. The lists are for grades one through eight. The first and second grade level has words with a short vowel sound, r controlled vowel, silent e words, words that end in double consonants, words that end in y, two vowels together and some sight words. There are also number words, color words, and homophones. There is also some grammar and spelling rules that are appropriate for that grade level. Each grade level has similar categories.

In the back of the Natural Speller is a list of consonant and vowel sounds. There are also the standard spelling rules about making words plural, prefixes, suffixes, and syllables. There is even a list of grammar rules.

I used Spelling City when we were in the process of moving. It is an online program. You can buy a membership or use the free version. I used the free option. There are spelling lists that you can use or you can input your own list. Your child can practice the words with online games. Then take a test. My children liked playing the games. I did not like imputing our lists. It was a lot of work. The lists that were on the site during the time that we used the program were too easy for my children.

Painless Spelling by Mary Elizabeth is for older students. The book gives a lot of information about spelling that would be interesting to teenagers. It is written in conversational style.

It has chapters on informal and text writing, the origins of words, and the differences between British and American spellings.

She shows you the differences between visual and sound patterns in English. There are charts and examples of the different sounds and the way that they are spelled.

You will not find a list of 25 words that need to be learned each week. The Painless Spelling does have examples of words that fit the chapter’s subject.

We like the Spalding Method. I discovered the method while looking online. She teaches that there are 44 sounds that are written 70 ways. In her method there are 29 spelling rules. I went over the different sounds and rules with my older children. This method seemed to help my children learn to spell. They are beginning to see patterns.

I have since checked out the book Writing Road to Reading by Romalda Spalding. It is a large book that takes several weeks to digest. She stresses making a spelling notebook. The notebook should be started in kindergarten when the child has learned the first forty-five phonograms. She has examples of how the notebook should look like.

I wish that I had this book when my children were young.

The one thing that I have against homeschool spelling programs is the words are usually not from my child’s writing. What I like to do is have my children write every day. There will usually be some words that my children do not know how to spell. They will ask how to spell a word. I will have sound put the word. I also try to have my child look up the word in the dictionary. Checking in a dictionary can help your child see if it is the word with the correct meaning.

I also try to have my children put the misspelled word in their notebook. Each child has a notebook that has different phonograms listed. The phonograms are those that are in the Spalding book. They place the word that was misspelled under the correct phonogram.

I have come to the conclusion that homeschool spelling curriculum will not make my child into a great speller. The only thing that will help is practice writing.