Noah and the Flood -
a Unit Study

Noah and the flood is an interesting homeschool unit study. We will combine Bible with science and history. There is also writing assignments.

The study is meant for elementary aged children. Younger children will enjoy doing the hands-on activities. Older children can research the different views about the flood.

Read the story of Noah and the flood. It is found in Genesis starting at chapter six verse five. The story continues through chapter nine verses eighteen.

In Genesis six we read that the Lord saw that man was wicked. He was sorry that he had made man. So the Lord decided to destroy man and all living things on earth.

Noah found grace with the Lord.  The Lord told Noah to build an ark because there would be a flood. Noah was to bring two of every animals, birds, and creepy things and put them in the ark. He was also stored food in the ark for all of the animals and his family. Noah did as the Lord commanded. Noah his wife, his three sons and their wives, and the animals went into the ark.

The fountain of the deep burst forth and it rained for forty days and forty nights. The waters increased and lifted the ark up. Only Noah and those in the ark were saved. The waters prevailed for 150 days.

Then the Lord remembered Noah. He made a wind pass over the earth. The waters subsided. The art rested on the mountains of Ararat. Noah let out a raven. Then he let out a dove. When the dove brought back an olive branch Noah knew it was time to leave the ark. He was in the ark for one year.

When Noah left the ark builds an altar to the Lord. The Lord was pleased. The Lord made a covenant with Noah. The sign of the covenant was the rainbow.

Now that you know the story of Noah, look for other verses in the Bible that talk about Noah and the flood.

There are two views concerning the flood. One is that it was a local flood. The other view is that it was worldwide. Older children might like to research both views and write about their viewpoint.

Research about different boat throughout history such as the;

In Genesis chapter seven verse eleven we read that the fountains of the deep were broken up. This probably caused earthquakes and volcanoes.

When I did the Noah and the flood study with my children we studied about the formation of rocks.

I have read that you can show how water can arrange sediment into layers. I had my son place some dirt, some small rocks, and some twigs in a jar. I then filled the jar about half full with water. I shook the jar to mix everything. I then let the jar sit. I was supposed to see layers. All I saw was dirty water. I waited for twenty-four hours.

This next exercise does work. I have made “fossils” by pressing an item such as a leaf or pinecone into clay. To make a cast fossil grease the clay with Vaseline. Then pour Plaster of Paris on the clay. When the plaster dries you will now see the “fossil” in the plaster.

Igneous rocks are formed from lava. Lava comes from volcanoes. When the lava cools quickly the rocks have fine-grained crystals. Two examples are pumice, and obsidian. If the lava cools slowly the crystals are large. An example of this kind of rock is quartz.

During this study you could also learn about the properties of water.

You can also study about the weather during this time. I also have a page weather lessons.

Have your child pretend that he is on the ark. Have him write about his experiences. What was the weather like? What did he do all day? What did the animal do?

Write a report about the history of boating.

Noah and the Flood Hands-on Projects

Make an ark bowl out of cardboard. My bowl is 15 inches long, 2.5 inches wide and 1.5 inches high. I cut a piece of cardboard 15 inches by 5.5 inches. I then marked the two 1.5 inch sides with pencil. I then scored the sides with the sharp end of a protractor. When you score the side you do not want to go all of the way through the cardboard. Just score the line enough so that it will fold on the line. I then took a piece of cardboard – by 1.5 inches high. I stapled the piece to the ends of the ark. To hold the ends on better I also used some tape. Before I added the cookies I placed a piece of waxed paper in the ark. 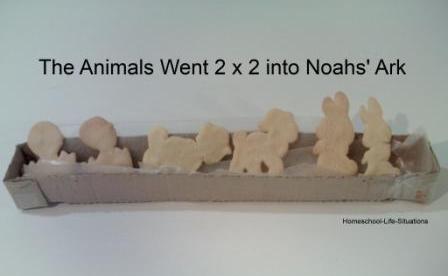 Another idea for a hand-on activity for Noah and the flood is to make a paper boat that floats. I got my directions from 101 Science Tricks by Roy Richards page 64.

You will need a square piece of paper.

Fold the sides into the center so that the ends meet.

Fold each of the four corners to the center.

Fold to mark the horizontal center. Fold each side over. The folds will form a point at each center.

Fold each horizontal point into the center.

Fold the boat in half the long way.

Turn the boat inside out. It will look something like a canoe or rowboat.  Float your boat in the bathtub.

In Noah and the Flood unit study your child should have learned something about the formation of rocks, fossils, the water cycle, and the history of boating. We also learned that Noah believed in God. In the Bible we can read about how we can believe in God too.

Return to the Home Page